Next“Free Software in Ethics and Practice”, speech by Richard Stallman
CongressInnovationUniversity of Salamanca

Free software and the GNU ideology straight form the creator

US programmer Richard Stallman visited the University of Salamanca to deliver a conference entitled “Free Software in Ethics and Practice”.

Richard Stallman is a free software advocate par excellence, and defends it at all costs. To him we owe the GNU operating system, as well as the founding of the Free Software Foundation, an agency that promotes the concept of free software. At the moment he is dedicated to spread the GNU philosophy around the world through talks, conferences and workshops.

It has been a pleasure to be able to listen to him and find out about his ideas and proposals directly from him. Stallman has told us that he does not have a mobile phone, and is not planning to get one until these devices have free software. He takes great care by browsing through specific websites only, in order not to give access to his browsing history and generally avoids using any device that can leave some trace in the network. 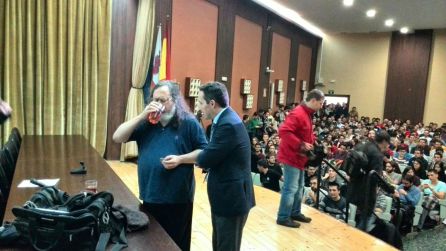 The Students Section of the ACM association of the USAL was in charge of organizing this talk in collaboration with the Dean of the Faculty of Sciences. Good work and thanks for the initiative. It is seldom to see the Faculty´s hall so filled with people.

As published in media: